Tired of the political forces in Washington DC that continue to deny or act on the obvious, ie, climate change?  Now there’s finally a political group trying to do grassroots support for climate action candidates to Congress.  Check out them out at www.climatehawksvote.com and at facebook — finally, a group of hawks I can agree with! This is not just another issue — it is THE issue: we’re talking survival of our civilization!

So I’ll let them speak for themselves below, but in case you haven’t done so yet, REGISTER TO VOTE! And urge all your friends and family to register, and then actually vote! Our children are worth fighting for at the ballot box, and it’s time to make climate action the top priority when we elect leaders. Fight for the future! 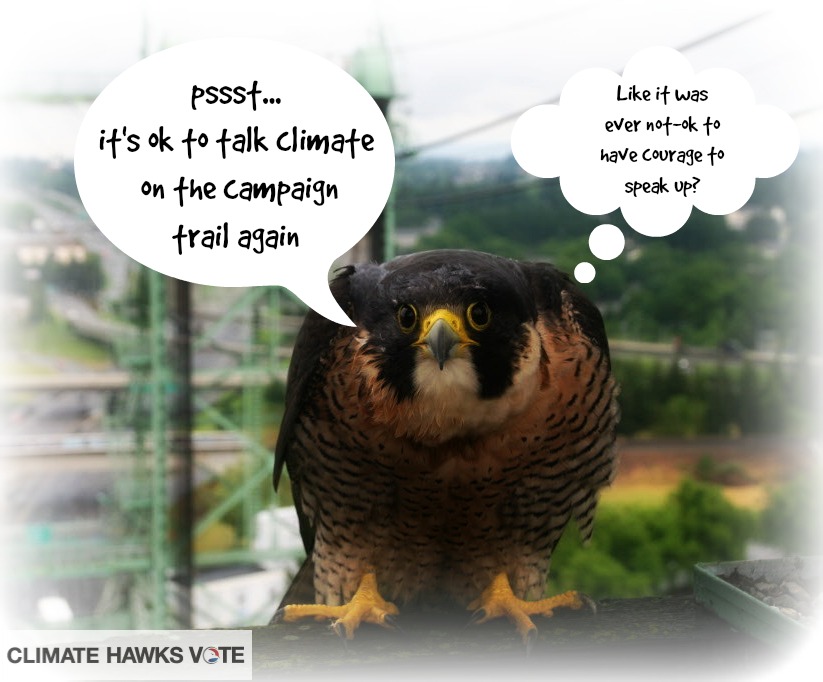 Our goal is to elect climate hawk leaders – those who prioritize and speak on the climate crisis. Simply put, climate change is the greatest threat facing the next few generations of humanity, not just another Democratic issue, but too many politicians are afraid to talk about it.

Waffling on carbon pollution and voting for fossil fuels should be as unacceptable as voting against a woman’s right to choose. We don’t tolerate elected officials and candidates taking money from tobacco companies who profit from human suffering and death; we shouldn’t tolerate them taking money from coal, oil, and gas companies whose business plan is to cook the planet.

We seek to elect only those politicians who show leadership on climate change.  Join us.

In the Los Angeles-Ventura County area? Our inaugural Climate Luau is June 29.

Join the swelling numbers of voters TELLING Congress they’ll vote for Clean Energy candidates here. This is an ongoing campaign (the next Congressional election is this year!) so please, spread the word. It’s our way of telling Congress that a strong clean energy voting bloc is out there. This is how YOU can make a difference.

Find this interesting? Please re-post it!

Mel (Mary Ellen) Harte is a biologist (PhD) and climate change educator. She co-authored the free online book, COOL THE EARTH, SAVE THE ECONOMY, available at www.CoolTheEarth.US, and writes the CLIMATE CHANGE THIS WEEK column at the HuffingtonPost. Living summers in the alpine Rockies, she is on the frontlines of watching what climate change can do. Her diagnostic digital photographs of wildflowers have appeared in numerous publications.
View all posts by melharte →
This entry was posted in Uncategorized and tagged clean energy, climate change, climate change solutions, Congress, Cute Animals, environment, global warming, inspiration, nature. Bookmark the permalink.